The weekend came sooner than usual for Samoa as the tiny South Pacific country crossed over the international date line and jumped forward a day in time. 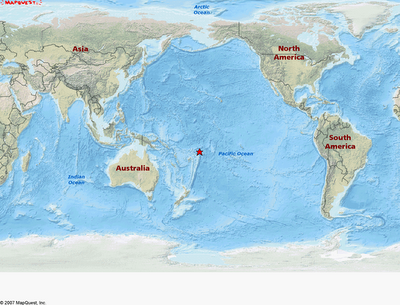 Samoans who had gathered around the main clock tower in the capital, Apia, cheered and clapped as the clock struck midnight on Thursday to the wail of sirens and burst of fireworks and time jumped forward 24 hours to Saturday. Drivers circled the clock tower blaring their horns, and prayers were held across the country. The change effectively erases Friday 30 December 2011 from its calendar.

The switch is also being made by neighbouring Tokelau to align the islands' time with Asia-Pacific trading partners.

The westward time jump means that Samoa's 186,000 citizens, and the 1,500 in the three-atoll UN dependency of Tokelau will be the first in the world to ring in the new year, rather than the last.

The date line switch came 119 years after US traders persuaded local Samoans to align their islands' time with nearby US-controlled American Samoa to assist their trading with California.

But the time zone put Samoa and Tokelau nearly a full day behind Australia and New Zealand, which are increasingly important trading partners. When it was dawn on Sunday in Samoa, it was already Monday morning in Sydney and Auckland.

In June, the Samoan government passed a law to move Samoa west of the international date line, which runs roughly north-to-south through the middle of the Pacific Ocean. Under a government decree, all those scheduled to work on the nonexistent Friday will be given a full day's pay.

As well as the economic advantages, the time jump is also expected to make the everyday rituals of family life a little more pleasant. Like many small Pacific island states, many of Samoa's people live permanently in other countries. About 180,000 Samoans live in New Zealand and 15,000 in Australia. The date line switch means families split between the island nation and Australia or New Zealand can now celebrate important events such as birthdays at the same time.

"We've got to remember that over 90% of our people emigrate to New Zealand and Australia. That's why it is absolutely vital to make this change," said the prime minister, Tuilaepa Sailele Malielegaoi.

Officials have begun work on changing maps, charts and atlases to reflect Samoa's new date line position. A stamp, featuring the phrase "into the future," has also been created to mark the switch.

Although generally embraced by most Samoans, the date change was not without a few little glitches. Digicel, the most popular mobile phone service provider in Samoa, said it would have to update its systems after the time jump, leaving phone services dead for about 15 minutes.

The original shift to the east side of the line was made in 1892, when Samoa celebrated 4 July twice, giving a nod to Independence Day in the US.

The date line is not mandated by any international body. By tradition, it runs roughly through the 180-degree line of longitude, but it zigzags to accommodate the choices of Pacific nations on how to align their calendars.